On Thursday the 17th May 1945, just nine days after VE Day, Lancaster RF 124 took off from East Kirby Airfield in Lincolnshire at 13.35 on a routine training exercise.  The aircraft crashed near to this site, killing all on board.

‘Aircraft RF124 crashed 17.5.45.  It took off on a normal non-operational cross country flight & at 17.15 hours a message was received to the effect that the a/c had been seen near Wolverhampton coming out of the clouds apparently out of control and it crashed into a roadway at Wednesfield. The a/c was completely destroyed & the whole crew were killed.’   The cause of this accident is not known as the findings of this investigation have not yet been received.

Very small fragments of wreckage were all that remained after the fire was extinguished. The authorities were unable to remove the crew as there was nothing recognisable after the explosion and inferno.  The wreckage and fragmentary remains of the crew were bulldozed into the crater and a local minister performed a simple funeral ceremony at the site.

The following day’s Express & Star newspaper reported that seven members of the crew of a four-engined Lancaster bomber had been killed the previous night when their machine crashed in Lichfield Road, Wednesfield, and was blown to pieces. Four bricklayers who were on the road some distance away were thrown to the ground by the blast and had to be treated for shock. Pieces of the bomber were strewn over an area two miles wide. A stretch of hedge had been burnt to the ground, and the grass of a field scorched and burnt over a large area.

There were no signs of the engines, but the crash caused a crater five feet deep in the road. The chimney pot of nearby Moat House Farm was thought to have been knocked off by the bomber, but this was the only damage to houses, of which there were plenty towards the centre of Wednesfield.  A witness at the time said that bullets went off like a firework display as many of them appeared to be tracers. The plane seemed to come down in a swift vertical dive.

No. 630 Squadron was formed on 15 November 1943 at East Kirkby from B Flight of No. 57 Squadron. Its Lancasters began operations immediately and for the remainder of the war took part in the strategic air offensive against Germany.   This particular Lancaster crash was noteable, as it was the first fatal accident involving Bomber Command aircrew/craft since the cessation of hostilities in Europe. This Lancaster’s last operational mission of the war had been a mining detail over the Oslo Fjord in Norway on the 25/26th April 1945.  This  was the final operational mission of 630 Squadron in WW11.   Following a few weeks of transport duty after the end of the war, the squadron disbanded on 18 July 1945. 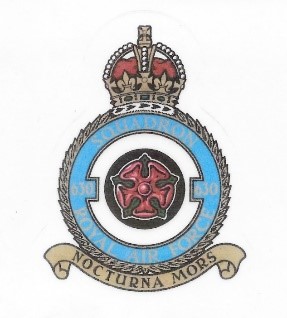 There were a number of witnesses who saw the Lancaster fly over Wednesfield before crashing on the Lichfield Road. One witness, who was an Express & Star transport driver, was one of the first on the scene. He said that he was handing a parcel of newspapers to a girl in Stubby Lane when he heard the plane flying very low:

“It passed right over me”, he said, “and there seemed to be two explosions in the air before the crash.    I ran to the spot immediately, but it was impossible for me to do anything, as there was just a lot of wreckage scattered over a wide area, and no signs of any member of the crew except fragmentary remains. Bullets were exploding, and flares were going off.”

Another witness was standing on top of an air raid shelter in Amos Lane retrieving a ball to continue playing cricket with his friends.  He said:

“We heard the engines of a plane and from a low cloud base saw the four engine Lancaster Bomber emerge. It was probably only 500-600 feet above ground level. I think that there was smoke coming from at least one of its engines.   It appeared as if it had flown over Woden Avenue School, over Nordley Road, across the end of King George’s playing field, between the lower end of Amos Lane and Tithe Road, disappearing into the greyness and below my horizon. There was a loud but muffled bang followed by a cloud of thick black smoke. The crash site was less than two hundred yards from houses and the Yale factory and I feel that it was through the skill of the pilot and crew that there was not a greater catastrophe, with the loss of many civilian lives.”

There were many other witnesses who saw the Lancaster in flight and there were others that went to view the site of the crash afterwards. The biggest debate amongst many of the witnesses has been about the direction the Lancaster came from.  Witnesses were invited to attend a meeting on October 22nd 2019 to resolve any differences of opinion.  It was finally agreed that the Lancaster flew over King George V playing fields and then did a U-turn towards the New Invention area before coming back over Stubby Lane apparently trying to land on the cricket ground.  However, it came to grief on the Lichfield Road. Many of those that attended the meeting were in their mid-to-late 80s and so were old enough to remember. 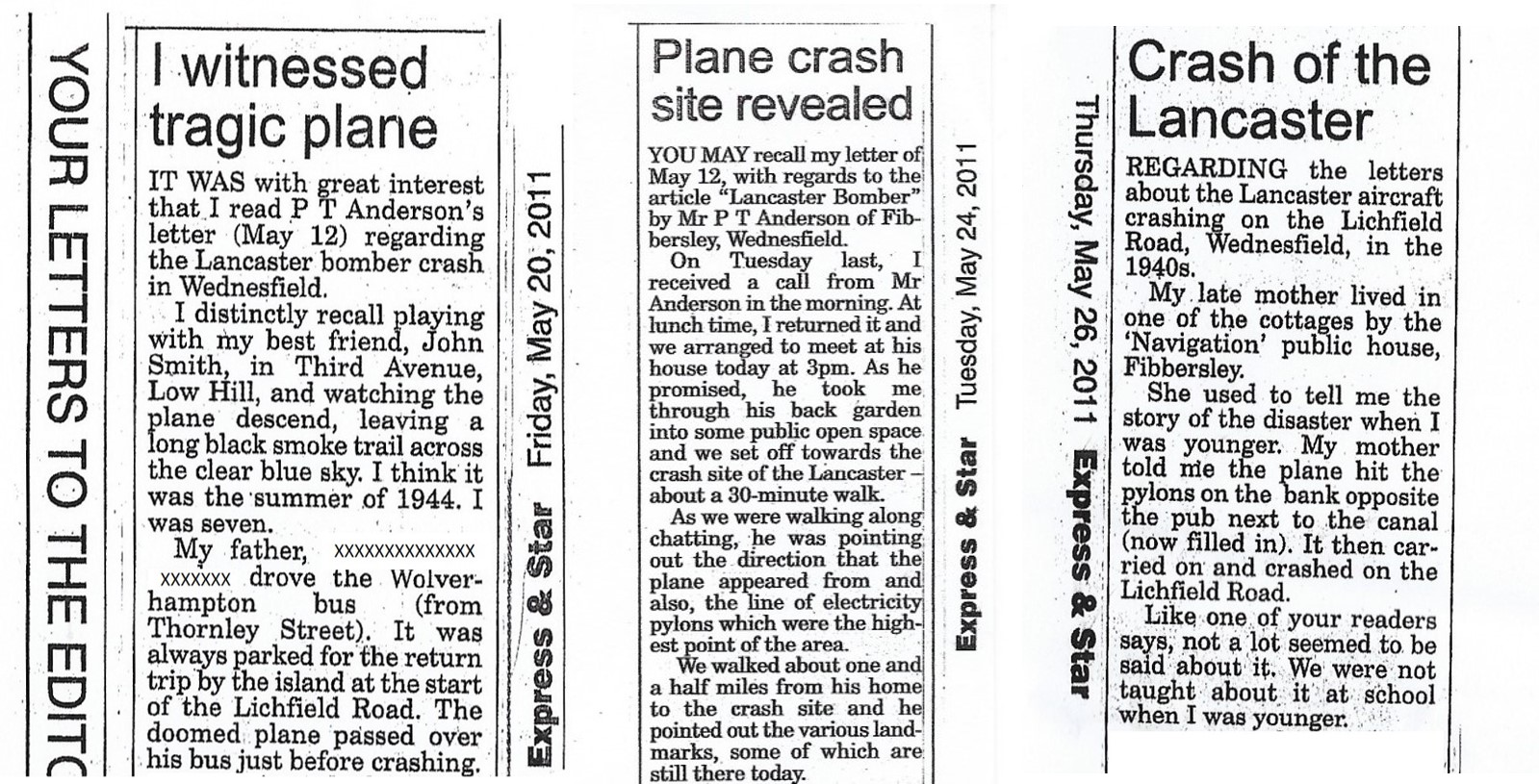 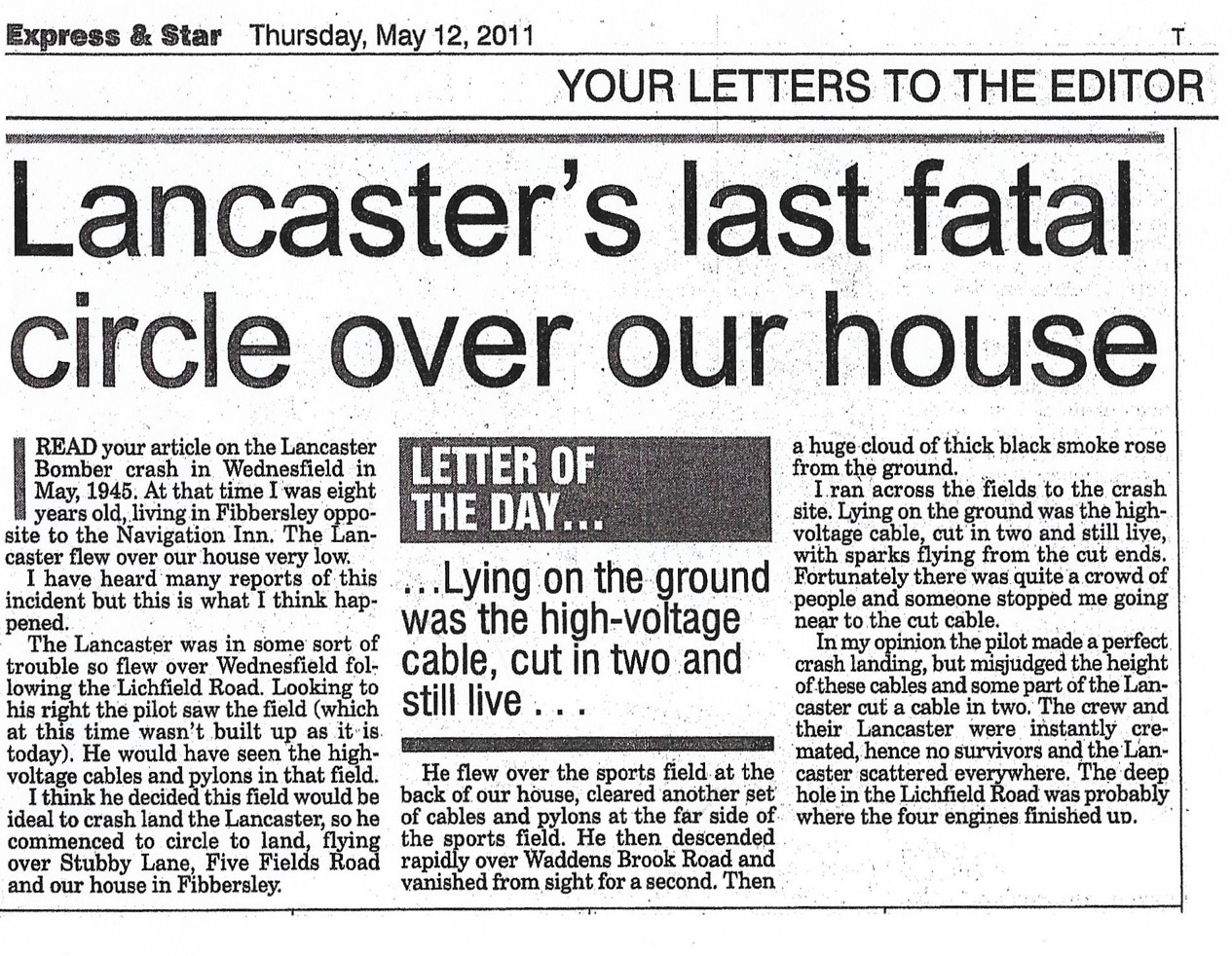 Wednesfield History Society would like to thank the people of Wednesfield and beyond for donating so generously towards the building of this memorial. Thanks are also due to the kind and generous local business owner of Hilton Main Construction Ltd who has given so much to this project, and also to the City of Wolverhampton Council and Wednesfield’s local Councillors for their much needed help and co-operation in bringing this project to fruition.

In addition, the City of Wolverhampton  Council has agreed to name streets in the new Lakefield Road residential development after the crew and the crash. 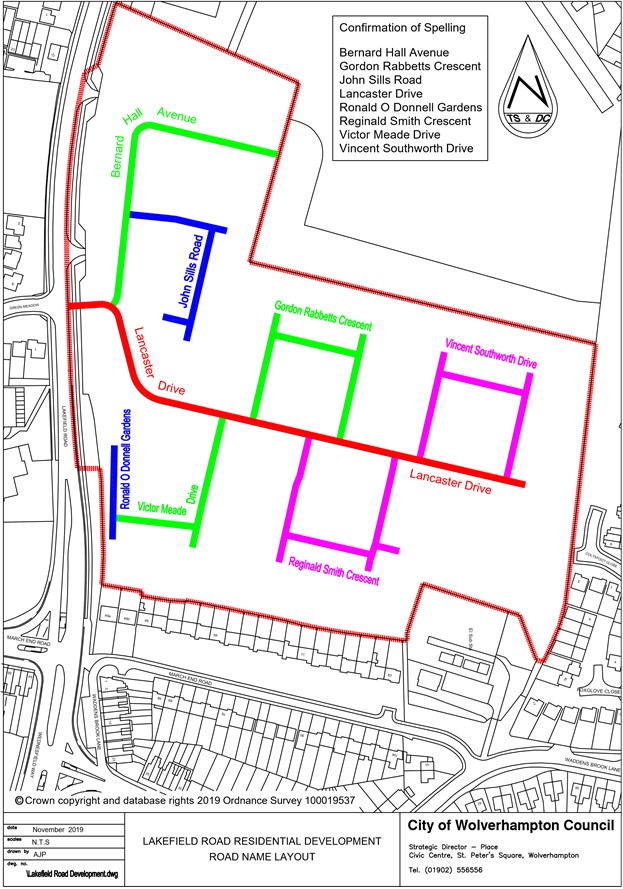 At the time of the Crash the nearby fields had been sown for a crop of oats.  Unfortunately, the crash not only damaged the crop but also destroyed some of the fencing around the field.  A claim was made to the aviation authorities for compensation.  See below. 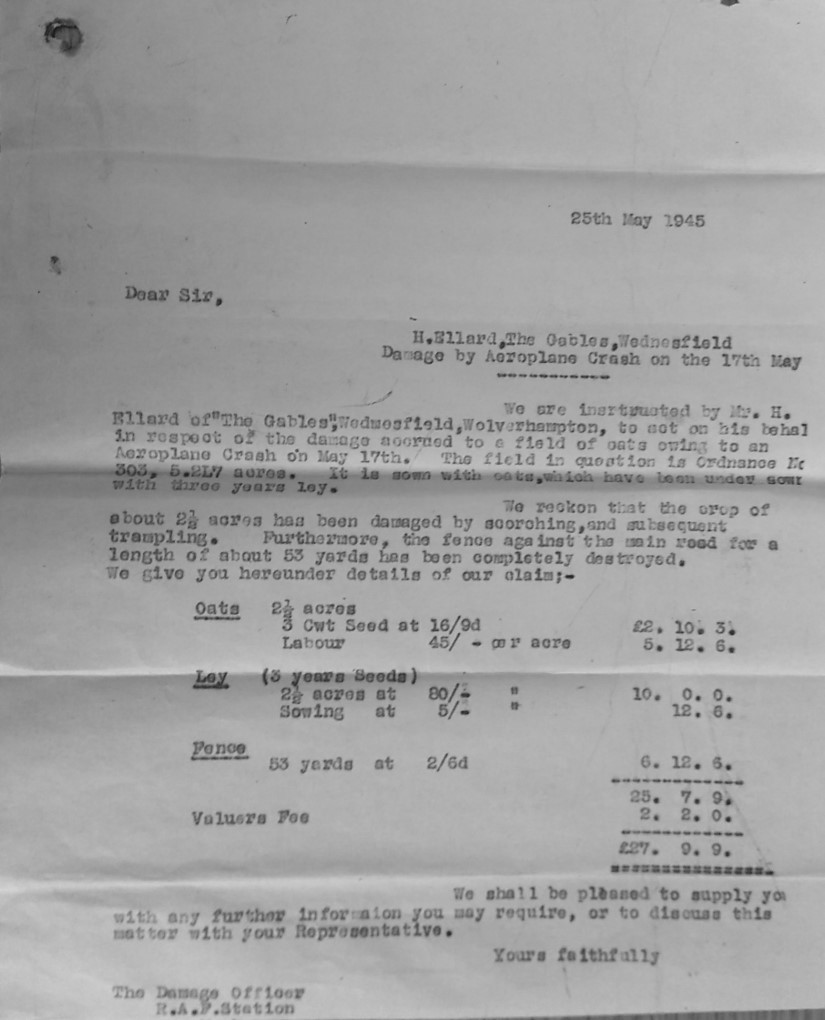 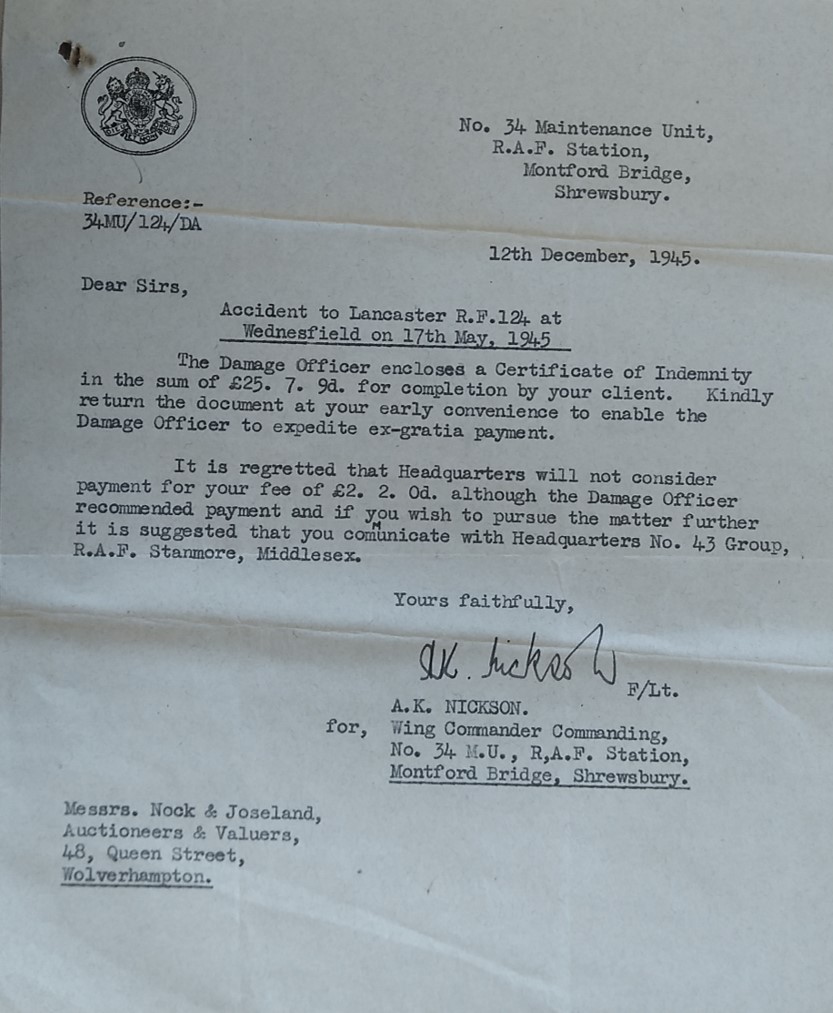